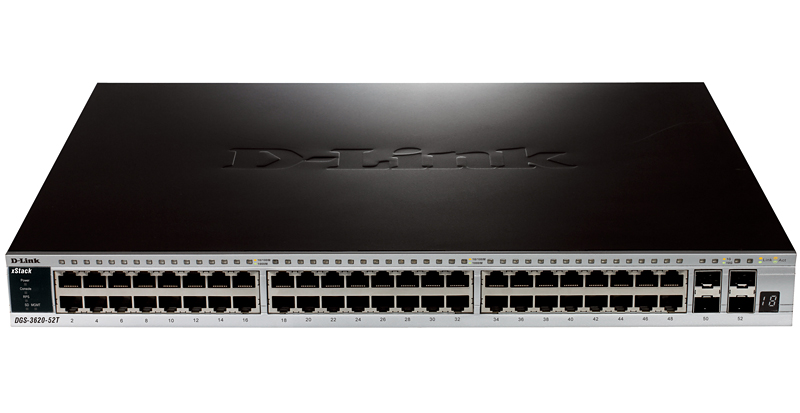 The switches of the new generation series xStack DGS-3620 provides networks of large enterprises and small and medium-sized business (SMB) high performance, flexibility, security, multi-layer Quality of Service (QoS) and the ability to connect a backup power source. The switches provide high-density Gigabit Ethernet ports for connecting workstations, equipped with SFP ports and 10 Gigabit SFP + and supports the advanced features of the software. The switches can be used as a device-level access units or in the core of the network to create a multi-level network structure with high-speed backbone and centralized servers connection. Service providers can also take advantage of the switch to the high-density SFP ports to form the core optical network (FTTB).

Virtual Stack
Built-in Single IP Management technology allows the switch DGS-3620 to become part of a virtual stack and create a multi-level network structure with high-speed backbone and centralized servers connection. Are combined to a stack unit placed in any point of the same network domain, and the additional ports 10-Gigabit uplink for transmitting traffic vnutristekovogo at 20 Gbit / s in full-duplex mode. This will minimize the impact of single point of failure, avoiding the problems associated with long cables and physical stacking method, and eliminates the need for cables for stacking.

Stacking on the topology of the "ring"
Alternatively, a virtual stack, depending on the topology stacking - a linear or fault-tolerant "ring", users can use one or two ports of 10 Gigabit Ethernet SFP +, to create a physical stack. In such a stack, you can combine up to 12 series switches DGS-3620 to get up to 576 ports of Gigabit Ethernet. This enables not only high capacity stack, but the ability to control costs.
Safety, performance and availability Switches DGS-3620 series provides a complete set of security features, including multi-level L2 / L3 / L4 Access Control Lists and 802.1x user authentication via TACACS + and RADIUS.

To improve the performance and safety switches series DGS-3620 provides extensive support for VLAN, including GVRP and 802.1Q. To support converged applications including VoIP, ERP, and videoconferencing, rich feature set QoS / CoS 2/3/4 levels ensures that critical network services are served with proper priority. To protect the switches against traffic flooding caused by virus / worm series switches DGS-3620 provides a feature D-Link Safeguard Engine, providing safety, reliability and network availability. Bandwidth control in steps of 64 kbit / s allows you to limit the bandwidth for each port. Bandwidth control for each flow allows tuning of service types based on specific IP-addresses or protocols.

Support for IPv6
Series Switches DGS-3620 supports IPv6, including IPv6 Tunnel, ICMPv6, DHCPv6, RIPng, OSPFv3, BGP +, and so on. D. Due to port 10-Gigabit and IPv6 support series DGS-3620 is a cost effective solution that is compliant with IPv6 in accordance with the demands in the future.

Technology D-Link Green
D-Link is a leader in the development of innovative energy-saving technology that does not sacrifice performance or functionality. Switches DGS-3620 series support the technology D-Link Green, which allows the use of power-saving mode, Smart Fan, reduce heat, and automatically reduce power consumption based on cable length. The power saving feature automatically powers down ports. Smart Fan function automatically turns on the built-in fans at a certain temperature, providing continuous, reliable and eco-friendly operation of the switch.